Zeng Fanzhi's work mingles the history of China with his own personal history. His memories of a youth spent living near the hospital in Wuhan have left their mark on the early series of pictures, with their depictions of surgical operations, waiting rooms, meat and unclothed bodies. Other works from the 2000s call up China's past: in Tian’An Men (2004), for example, we recognise Mao. And while the pictures making up the various Mask Series still betray the influence of Pop Art, the recent portraits and landscapes tend towards a darker abstraction. Hatched with brambles and seething with animals and human bodies, his gigantic polyptychs show a restrained expressionism that references German painting, and that of Dürer in particular.

This exhibition offers visitors the chance to discover the whole of Zeng Fanzhi's career via the presentation of forty paintings and sculptures in reverse order, from 2012 to 1990. In the wake of a number of solo shows – The National Gallery for Foreign Art, Sofia, 2010; Rockbund Art Museum, Shanghai, 2010; Francisco Godia Foundation, Barcelona, 2009; Musée d’Art Moderne de Saint-Etienne Métropole, France, 2007 – the Musée d’Art Moderne de la Ville de Paris is offering an interpretation of the oeuvre shaped in close collaboration with the artist himself.

Zeng Fanzhi was born in 1964 in Wuhan, China. In the course of his training at the art school there he got to know both Chinese and Western contemporary art. Driven by these influences and keen to find a more stimulating context, in 1993 he left for Beijing, where he now lives and works. 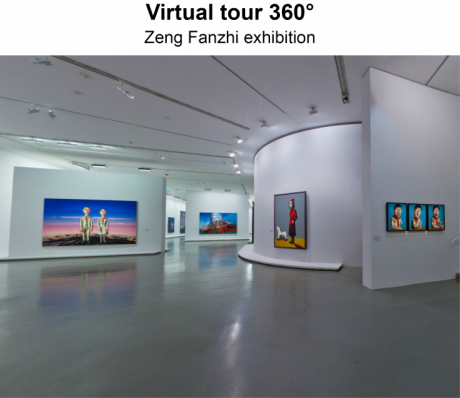 This exhibition enjoys the generous support of the Yuz Foundation.