Beginning in October 2021, two systems for exploring the work in augmented reality and online will offer visitors, free of charge, a new, more immersive experience of The Spirit of Electricity, and a real insight into the scientific and social implications of Dufy's work. This exercise in digital mediation also includes a contribution by the physicist and philosopher Etienne Klein, in the form of podcasts expanding current content. As such, it is at the core of MAM's upcoming scientific and cultural project, one of whose key aims is to enhance and bring a new perspective to the museum's collection.

Via this totally new joint venture with the scientific world, the Musée d'Art Moderne intends to re-acquaint the public with The Spirit of Electricity from hitherto unexplored artistic, technological, scientific and social angles. Taking the form of a dialogue between the arts and sciences, the project is the upshot of a partnership with the FIEEC (Federation of Electrical, Electronic and Communication Industries) and the Rodin Club, a group of scientific experts.

With the aid of a free tablet, the visitor has a choice of three tours of the exhibition – artistic, scientific, for the family – each lasting some 10 to 15 minutes and covering:

– The history of the work, from the context of its creation to its different compositional elements, explored via 10 major themes relating to its production and an understanding of its references: Iris, The Spirit of Electricity, The Seine, Olympus and the Power Station, etc.

–  An introduction to electricity and to 22 of the experts – among the 108 appearing in the work – whose theory and practice played an essential part in the history of electricity and science.

– A more playful look at The Spirit of Electricity for the whole family: fun and inspiration. 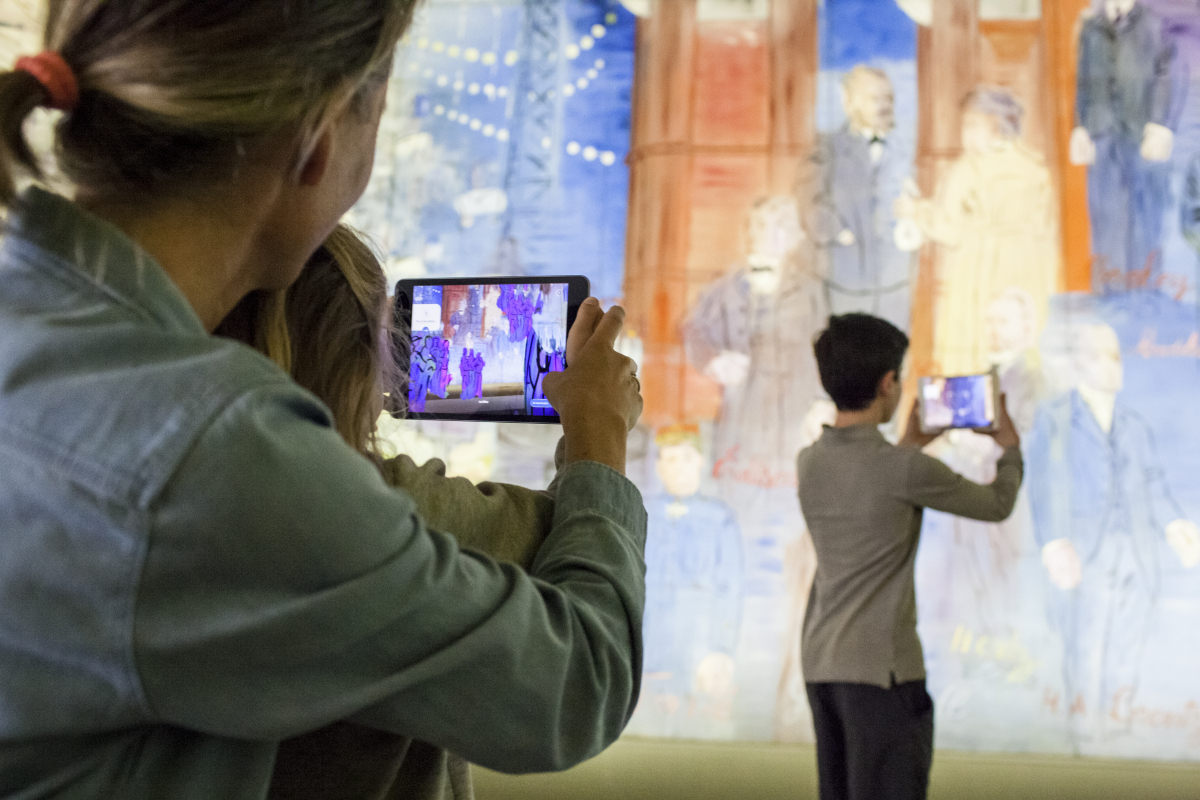 A special Spirit of Electricity site in French, English and Japanese.

The site will feature:

– A 360° tour of The Spirit of Electricity: your chance to discover every last detail hidden in the work.

– Access to the complete biographies of the 108 experts, descriptions of their inventions, and artistic and technical explanations.

– A system of filters allowing you to personalise your experience of the work.

Thanks to a QR code the public will be able to access an exhaustive account of the work by smartphone both at the museum and anywhere in the world on any type of screen. This is a joint project by a worldwide community of Spirit of Electricity fans.

More information about The Spirit of Electricity

One of the largest paintings in the world

On display in the heart of the Musée d'Art Moderne in Paris, Raoul Dufy's Spirit of Electricity is one of the largest paintings in the world. With an area of 600 square metres (6,500 square feet) and weighing 10 metric tons, this vividly coloured composition portrays the history and uses of electricity from the earliest observations to the most modern technical achievements. It was commissioned from the artist for the Electricity Pavilion at the 1937 World's Fair in Paris. In the interests of speed Dufy worked with a very quick-drying product developed by the chemist Jacques Maroger

Completed in record time, the project was backed up by extensive documentary research and sheer hard work. Offered to the city by Électricité de France (EDF), the work was installed in the Museum of Modern Art in 1964 in a space specifically designed to house it.

A colossal work of restoration

Refurbishment began with the restoration of The Spirit of Electricity, extending from July to October 2020. First came very precise photographic documentation, with the use of a drone enabling more than 1,000 shots of this 10 x 60 metres work. After this a dozen restorers were brought in to dust off the work and restore the colours of the 250 panels.

Looking at The Spirit of Electricity today

Resonant with the notions of progress and the future, this work is very much a creature of its time and the technology race, while insistently calling on the visitor to see things from a fresh point of view. Dufy's work is a bridge between technologies developed down the centuries – and more intensively in the early 20th century – and in our current era, where technological ferment is an everyday affair. Regular brushing-up on seminal scientific advances gives us a clearer idea of how our society is evolving.

A project with all kinds of backers

Entirely financed by the remarkable commitment of its backers, this digital mediation project is notably supported by EDF, the French electricity company which historically offered this masterpiece to the museum in 1954. Spirit of Electricity workshops for children and teenagers are being organised in the context of this partnership.

Since the project got underway, the FIEEC (Federation of Electrical, Electronic and Communication Industries) and its think tank, the Rodin Club, have been contributing major scientific input to its functioning as well as mobilising the generosity of their network.

With each participating according to their means, the private individuals, companies and foundation ensuring this 100% self-financing have the shared aim of guaranteeing the work's enduring recognition.